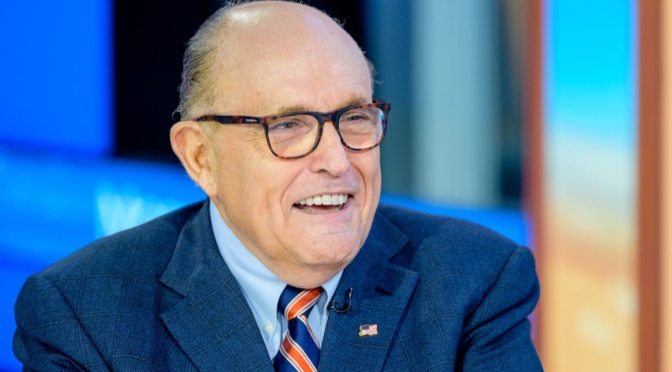 By Arjun Walia (via Collective Evolution)

What Happened: A few days ago, a top Republican senator mentioned the possibility that the Federal Bureau of Investigation investigated whether there was child pornography on a laptop and hard drive that supposedly belonged to Hunter Biden. He did so when Journalist Maria Bartiromo asked Sen. Ron Johnson, the chairman of the Senate Homeland Security and Governmental Affairs Committee about a Business Insider report that described faint handwriting on a subpoena served last year to a Delaware business that was given a water-damaged MacBook Pro to repair but was never retrieved along with a hard drive. The hardware purportedly contained data about foreign business dealings and other matters related to the son of former Vice President Joe Biden. You can watch a clip of that interview here.

On October 16th, American attorney, cybersecurity advisor and politician Rudy Giuliani, who also served as Mayer of New York City from 1994 to 2001 claimed on his Youtube Channel that he has come across evidence that this laptop and hard drive do belong to Hunter Biden, and that there’s a signature to prove it which he has in his possession. He also thoroughly explains the story about Hunter’s supposed laptop and how it came into the possession of the Delaware business. Furthermore, he claimed that there were photos of activity on the laptop that anyone “would have a hard time describing, and really should be left to more private discussion.”

Giuliani has since mentioned that Hunter Biden had numerous pictures of girls, who were just children, on the laptop as well as inappropriate messages, and that he has turned this evidence over the the Delaware State Police. He has expressed that the Chinese government may have access to this kind of thing in order to blackmail the Biden family into doing whatever they want.

Andrii Derkach, a politician the US Treasury believes to be a “Russian agent,” claimed on Friday that another device belonging to Hunter was given to Ukrainian police.

We saw this perspective with Jeffrey Epstein, where multiple sources, including a high ranking intelligence official, claimed that part of his job was to blackmail high level politicians and businessman by having compromising videos and pictures of them with children. Christopher Mason, a  TV host and journalist/reporter who has known Ghislaine Maxwell for decades has gone on record and said he was told that Epstein rigged his multiple homes with cameras and kept tapes of everyone/everything. He says Maxwell has access to this footage. You can read more about that here.

Approximately one month ago Hunter Biden, the son of presidential candidate Joe Biden, apparently sent thousands of dollars to individuals allegedly involved in sex trafficking, according to a report recently released by Senate Republicans. According the report, Biden “has sent funds to non-resident alien women in the United States who are citizens of Russia and Ukraine and who have subsequently wired funds they have received from Hunter Biden to individuals located in Russia and Ukraine…The records also note that some of these transactions are linked to what “appears to be an Eastern European prostitution or human trafficking ring.”

Facebook Fact-Checker Politifact Weighs In: According to Politifact, a Facebook Fact Checker,  “There is no evidence that a laptop previously belonging to Hunter Biden contains child pornography. The allegation originated on an anonymous internet forum that’s a known source of online disinformation.”

They mention that a rumour quickly emerged that “Hunter Biden has 25,000 pics of him torturing and raping children under age 10 in China on his laptop.”

These allegations seems to have stemmed from multiple tweets by radio host Wayne Root claimed ,without evidence, stating that he has that Hunter Biden’s laptop contains videos of him sexually abusing and torturing Chinese children.

CBS News interviewed the owner of the computer store, John Paul MacIsaac, and they state that he was “unable and unwilling to answer key questions about how the laptop supposedly arrived in his store, and eventually, how the data was shared with Giuliani. CBS News interviewed MacIsaac for almost two hours on Wednesday and throughout the interview he contradicted himself about his motivations, raising questions about the truthfulness of one of the central figures in the story.”

The New York Post also interviewed him, you can listen to that entire interview here.

Giuliani claimed “dangerous people” are involved in the Hunter Biden laptop scandal – leaving the Mackbook repairman who leaked it fearing for his life.

More than 50 former senior intelligence officials have signed on to a letter outlining their belief that the recent disclosure of emails allegedly belonging to Joe Biden’s son “has all the classic earmarks of a Russian information operation.”

The letter, signed on Monday, centers around a batch of documents released by the New York Post last week that purport to tie the Democratic nominee to his son Hunter’s business dealings. Under the banner headline “Biden Secret E-mails,” the Post reported it was given a copy of Hunter Biden’s laptop hard drive by President Donald Trump’s personal lawyer Rudy Giuliani, who said he got it from a Mac shop owner in Delaware who also alerted the FBI.

Biden has of course denied all allegations.

Regardless of What You Believe About This Story, Child Trafficking and Sexual Abuse in places of power exists, and persists.

There are a number of examples of child sexual abuse in places of power. The Jeffrey Epstein/Ghislaine Maxwell cases are a great example of that, both involved and implicated in trafficking children for sexual purposes, and possible blackmail purposes as well.

Not long ago, As The Hill reports, “The Pentagon’s Defense Criminal Investigative Service subsequently identified hundreds of DOD-affiliated individuals as suspects involved in accessing child pornography, several of whom used government devices to use and share the images.” You can read more about that here.

There are many credible examples from Royal Families, the Vatican, big finance, big politics, Hollywood and more. If you’d like to go a bit more in depth and see some of this evidence, you can refer to this article I published last year.

Our Interview With A Survivor of Child Sex Trafficking:

Anneke Lucas is an author, speaker, advocate for child sex trafficking victims, founder of the non-profit organization Liberation Prison Yoga, and creator of the Unconditional Model.

Her work is based off her 30-year journey to restore her mental and physical wellbeing after surviving some of the worst atrocities known to humankind before the age of 12. Sold as a young child into a murderous pedophile network by her family, she was rescued after nearly six years of abuse and torture.

We recently conducted an interview with her. Below is a clip from the four part series, as it was a very long and detailed interview. You can access the full interview and start your free trial HERE on CETV, a platform we created to help combat internet censorship and allow us to continue to do our work and get the word out about various issues and topics.

Right now the citizenry is completely separated in their beliefs with regard to what’s happening, especially in big politics. Stories today are instantly jumped on and deemed false by ‘fact-checkers’ even when there is legitimate evidence behind the claims. Should people not have the right to examine information, opinions and evidence and decide for themselves what is and what isn’t? The amount of information censorship happening today is truly unprecedented.

This type of states is simply a reflection of an evolving human consciousness. We are becoming more aware, and we are questioning actions taken by governments that do not resonate. We are living in times where truth tellers, like Julian Assange and Edward Snowden, are exiled and thrown in jail for simply exposing unethical and immoral actions by powerful governments and corporations. What does it say about our world if we’ve come to the point where activists exposing harmful actions are completely silenced and ridiculed? What’s going on here? How did we get to this point and how do we change it? Why do we continue to rely and ask governments to make meaningful changes on our planet? Does voting simply hold up and perpetuate a system that’s no longer capable of helping the human race and our planet move forward in the direction it needs to take?

THIS ARTICLE WAS FIRST PUBLISHED October 21st 2020 on Collective Evolution