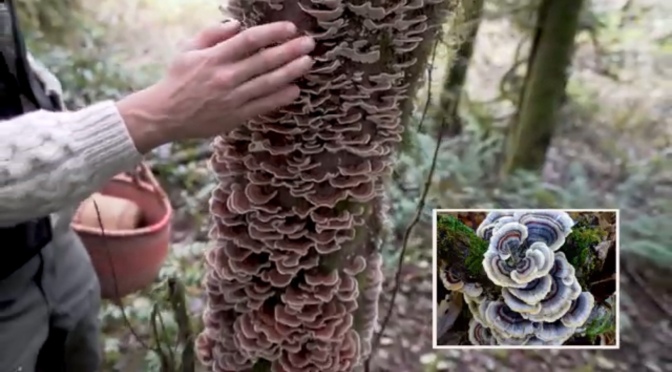 This mini-intensive goes deep into the mycelial layer, covering many uses and benefits that can be found in working with this Mushroom for your health needs.

Turkey tail is easy to find all over the world and is one of those important natural remedies to know about when looking to work with chronic health conditions and immune support.

It has been heavily studied by modern science and revered for its benefits since ancient times.

This mushroom and it isolates are some of the most studied of all medicinal mushrooms. In particular is the glucan-protein complex of Polysaccharide-K (Kresin, PSK, PSP) that is used in cancer therapy to counter-act the immune depressing action of common chemotherapy.

Approved in 1980 by the Japanese equivalent to the FDA for concurrent use with chemotherapy, it is covered by all health care plans in Japan. Both the isolate and the mushroom have been shown to increase survival time of cancer patients.

In large studies it has also been shown to be useful in stomach cancer, colorectal cancer, small cell carcinoma, and non-small cell lung carcinoma. PSK has been shown to enhance activity of chemotherapeutic drugs doxorubin and etoposide. US cancer doctors have seen both PSK and whole mushroom extract to have promises for chemoprevention due to multiple effects on the malignant process and reducing side effect of oral dosage. These studies, published in Lancet, found the results to be significant.

The sales for these unique all natural compounds have reached several hundred million dollars a year in Japan and China, making them the most widely used products in those countries by people facing serious immune challenges.

There has been great interest in Coriolus’ ability to work as an antiviral including HIV, HPV hepatitis and many other viruses.

Turkey has been studied by the biotech industry for its ability to digest many pesticides including PCP’s and to detoxify dangerous Hydro Carbons.

A variety of Turkey tail mushroom products are available at http://www.harmonicarts.ca