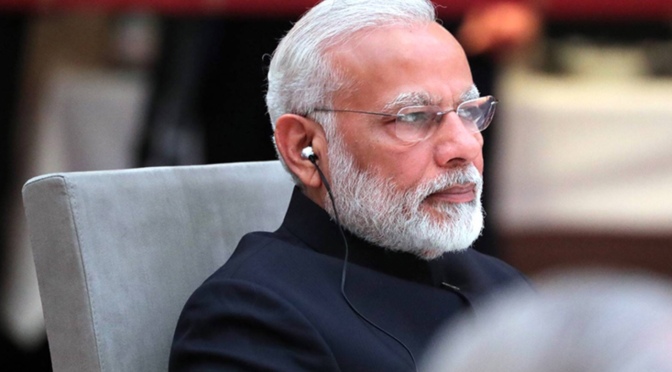 By Srdja Trifkovic (via Intellectual Takeout)

In the last seven days India has seen more COVID cases than any other country in the world. The official death toll is over 200,000, although the country’s flawed mortality statistics lead experts to believe that the true figure may be much higher. India’s hundreds of thousands of villages are home to hundreds of millions of people; many of these villagers die at home and their deaths remain unregistered.

So many people are dying that crematoriums are overwhelmed, spilling over into parking lots and other empty spaces. Improvised funeral pyres blaze near residential areas, burning thousands who died waiting for hospital beds or oxygen supplies. While a second wave of such ferocity could not have been predicted, the government’s distraction and complacency have turned it into a tragedy.

“With made-in-India solutions, we controlled the spread of the virus and improved our health infrastructure,” Prime Minister Narendra Modi boasted in January. In February his Bharatiya Janata Party (BJP) even passed a resolution hailing him as a visionary who had “defeated” COVID-19. Such boasts are now seen as a grotesque exercise in political point scoring, with momentous consequences.

This catastrophic second wave of COVID-19 infections and the manifest failure of Modi’s government to prepare for the crisis or to manage it competently calls into question an apparently attractive vision that has gained traction among some American geostrategic analysts in recent years. Its key tenet is that India can and should develop into a viable counterweight to China’s growing power, and that its political elite can and should be enticed to abandon India’s traditional policy of non-alignment in favor of a close partnership with the United States, leading to a military alliance.

In June 2016 I pointed out that Prime Minister Narendra Modi’s key strategic objectives broadly correspond with America’s interests in Asia. During his 12-day tour of Asia just over a year later, President Donald Trump repeatedly used the term “Indo-Pacific” instead of “Asia-Pacific,” parroting then-Secretary of State Rex Tillerson’s words from a few days earlier. Referring to the Pacific and Indian Oceans as a “single strategic arena,” he described India and the United States as “bookends” within that vast panregion. This was a striking novelty in the public discourse of America’s senior officials.

The unspoken intent was to bring India into a closer partnership with the U.S., Japan, and Australia in order to contain China. Such hopes received fresh impetus after a major border clash between Indian and Chinese troops in June 2020 in the disputed Western Himalayan area of Ladakh, in northern Kashmir. Some experts pointed out that India’s military alliance with the U.S. would be a “strategic nightmare” for China. Others wondered whether India is “the next China” and even argued that India can overtake China in the next decade.

Yet because of the recent COVID disaster, the contrast between India and China could not be starker. “China’s economy springs back from pandemic hit with record growth,” the Financial Times proclaimed on April 16, an event made possible because China successfully contained the virus. Comparable to India in terms of population (around 1.4 billion) but vastly different in culture and political institutions, China proved to be a more disciplined society with a more efficient civil service.

It is easy to ascribe the difference in outcome to China’s ruthless one-party rule. The epidemic could have been a significant threat to the legitimacy of the Chinese Communist Party, but it would not have been able to impose discipline on an unwilling populace. It is noteworthy that some countries which share many cultural traits with China but have a Western-style democratic system—notably Japan, South Korea, Taiwan and Singapore—have also been far more successful at controlling the virus than India.

The crux of the matter is that India is still largely a poor, internally divided, developing country. It is divided by both the resilient caste system and by religion. Even a Harvard pedigree does not rid one of caste, and the nation’s 200 million Muslims experience an uneasy coexistence with the majority Hindus. This spirit of mutual suspicion occasionally explodes into raw hatred.

India became a single polity under the British Raj in 1858, but the spirit of national unity, which the Congress Party tried to impose from above after the country gained independence in 1948, has never been internalized by the society.

In contrast China is an internally integrated nation-state par excellence. From the time of Qin Shi Huang, China’s first emperor (who ruled in 221-210 BC) the Middle Kingdom has been developing as a centralized state with a homogenous population, avoiding expansion beyond its ability to assimilate its new subjects. The ranks of its famously efficient civil service were filled on merit. Even the conquering Mongols kept the state structure essentially intact when their Yuan dynasty ruled China (1271-1368). Its current leaders are supposedly guided by the teachings of Marx, Engels, and Lenin. Nevertheless, China’s internal cohesion and its grand strategy vis-à-vis the rest of the world arguably would not have been much different today had the Kuomintang won the civil war back in 1949.

In the vital arena of economic growth, instead of catching up India is slipping behind. For 25 years following the beginning of Deng Xiaoping’s reforms in 1978, China’s average growth rate was 75 percent higher than that of India. Their per capita income was roughly the same in 1980. Today China’s per capita GDP is $10,000 while India’s is just $2,000. Even if calculated in purchasing parity terms (PPP), China still leads India by 86 percent. Per capita China has ten times more cellphones, four times more computers, and four times more TVs. China’s adult literacy rate is 97 percent, India’s 75 percent. The list goes on.

The ongoing COVID-19 debacle has laid bare certain structural weaknesses of the Indian state and society which have been present ever since independence. The country has had periods of solid growth rates since the early 1990s, but its birth rates have kept pace with economic growth and the problem remains unresolved. Its islands of impressive development—such as the IT industry complex in Hyderabad—remain surrounded by a sea of squalor. Modi was reelected in 2019 largely by pandering to passionate Hindu nationalism. His handling of the COVID crisis has been deplorable.

The U.S. would make a strategic mistake of the first order to treat India as a potential ally with the capacity to confront and contain China, or as a full-fledged American partner in the geopolitical great game. In reality India will not be able to compete with China in the post-COVID world. The advocates of an outright alliance need to consider the likely downside. Even if India were to depart from its traditional policy of non-alignment, instead of becoming a mighty asset of the U.S.-led ring of containment it could easily turn into yet another American defense dependent.

A security guarantee would likely disincentivize India from investing in its own defense. (Just think of NATO’s rich European members!) At the same time such a guarantee could make it dangerously confident in the belief that it is America’s duty to protect it. It is easy to imagine some future BJP government feeling emboldened to pursue more confrontational policies with its northern neighbor. That could get the U.S. entangled in risky scenarios with no benefit whatsoever to America’s well-being and security.

The only sensible strategy is to let the two Asian giants sort out their mutual relations as they see fit. In the Indian Subcontinent—and everywhere else for that matter—it is in America’s interest to reduce its commitments, rather than extend them.