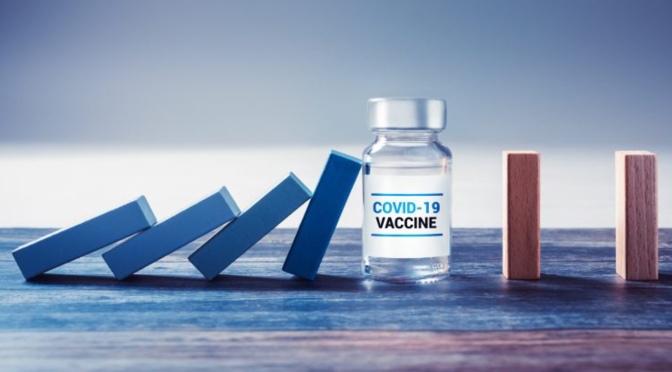 Denmark on Monday became the first country to exclude Johnson & Johnson’s (J&J) COVID vaccine from its vaccination program over a potential link to blood clotting disorders.The Danish Health Authority said in a statement it had concluded “the benefits of using the COVID-19 vaccine from J&J do not outweigh the risk of causing the possible adverse effect in those who receive the vaccine,” Reuters reported.

Danish health officials noted the European Medicines Agency’s (EMA) conclusion that “there is a possible link between rare but severe cases of blood clots and the COVID-19 vaccine from J&J,” referring to an investigation last month into eight U.S. reports of rare blood clots — one of which was fatal — that occurred after recent vaccination.

Unlike the Danish Health Authority however, the EMA concluded the benefits of using the J&J vaccine outweigh the risks. The EMA did recommend adding a warning to J&J’s vaccine label, and the company said it would comply with that measure.

“Taking the present situation in Denmark into account, what we are currently losing in our effort to prevent severe illness from COVID-19 cannot outweigh the risk of causing possible side effects in the form of severe blood clots in those we vaccinate,” the health authority said.

Both J&J and AstraZeneca vaccines use a modified adenovirus vector technology as opposed to themRNA technology used in the Moderna and Pfizer’s COVID vaccines.

The EMA noted in its findings on the J&J vaccine that one plausible explanation for the combination of blood clots and low blood platelets could be an immune response leading to a condition similar to heparin-induced thrombocytopenia.

Scientists in Norway and Germany who studied blood clots after vaccination with AstraZeneca suggested some people may experience an abnormal immune response causing them to form antibodies that attack their own platelets after being vaccinated.

It’s not yet clear if there might be a similar mechanism with the J&J vaccine, but J&J and AstraZeneca vaccines, as well as Russia’s COVID vaccine and China’s, are made with the same technology.

On April 13, the Centers for Disease Control and Prevent (CDC) and the U.S. Food and Drug Administration (FDA) called for an immediate halt to the use of J&J’s COVID vaccine, marketed under the company’s Janssen subsidiary, while they investigated at least six cases of potentially dangerous blood clots in people who received the vaccine. All six occurred in women between the ages of 18 and 48, and symptoms occurred six to 13 days after vaccination. One death was reported.

As The Defender reported, one of the six cases included a Nevada teen who underwent three brain surgeries to repair blood clots she developed about a week after being vaccinated.

On April 14, the CDC’s Advisory Committee on Immunization Practices (ACIP) postponed a vote on whether to lift the pause on the J&J vaccine, effectively extending the pause pending further analysis of data relating to blood clots in people who received the vaccine.

That same day, J&J revealed two more cases of blood clots — one in a 25-year-old man who suffered a cerebral hemorrhage during a clinical trial and another case of deep-vein-thrombosis in a 59-year-old woman.

On April 23, the ACIP voted 10 – 4 to lift the pause and continue use of the J&J shot without restrictions or an additional warning about the risk of blood clotting disorders after analyzing 15 cases of rare blood clots, including three deaths, according to a slide presentation shared during the meeting.

The ACIP said the link between blood clots and J&J’s COVID vaccine was “plausible,” but concluded the vaccine’s benefits outweigh the risks and recommended the vaccine for persons 18 years of age and older in the U.S. under the FDA’s Emergency Use Authorization (EUA).

Children’s Health Defense queried the VAERS data for a series of adverse events associated with the formation of clotting disorders and other related conditions. VAERS yielded a total of 1,845 reports for all three vaccines from Dec. 14, 2020, through April 23.

Of the 1,845 cases reported, there were 655 reports attributed to Pfizer, 577 reports to Moderna and 608 reports to J&J. U.S. health officials only acknowledged 15 blood clot cases associated with the J&J vaccine at the April 16 meeting.

Though J&J and AstraZeneca vaccines have been under the microscope for their potential to cause blood clots, scientists warned, as far back as December 2020, that mRNA vaccines like Pfizer and Moderna pose similar risks.