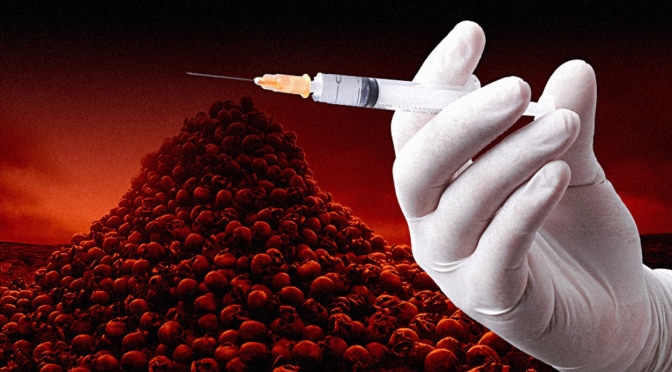 By Arsenio Toledo (via Natural News)

The research team from the University of Almeria‘s Department of Engineering recently published a report titled “Graphene Oxide Detection in Aqueous Suspension: Observational Study in Optical and Electron Microscopy.”

Graphene oxide, a material formed from graphite, is a known toxic substance. Previous studies have shown that graphene-based materials like graphene oxide can cause dose-dependent toxicity. It can damage the liver and the kidneys, spur on the formation of granulomas in the lungs, decrease cell viability and trigger cell apoptosis or pre-programmed cell death.

Animal studies have found that injection of graphene oxide in the body deposits the toxic substance in the lungs, liver, spleen and kidneys. Researchers have also reported difficulty in cleansing the material out of the body.

Many face masks being peddled by corporations are coated or lined with graphene. (Related: Wearing face masks coated in graphene can cause serious lung problems, warns Health Canada.)

In their report, the Spanish researchers also discovered significant amounts of graphene oxide in the swabs used in polymerase chain reaction and antigen tests. These tests are used supposedly to detect COVID-19.

Medical expert: No reason for graphene oxide to be in vaccines “except to murder people”

The revelation regarding the Spanish report and the graphene oxide in the Pfizer vaccines first came to light after it was reported by conservative commentator Stew Peters on his show, The Stew Peters Show.

Peters brought medical expert and 20-year pharmaceutical researcher Dr. Jane Ruby onto the July 8 episode of his show to talk about what graphene oxide is and its effects on the human body.

Listen to the entire conversation between Peters and Ruby on The Stew Peters Show here:

During his show, Peters asked Ruby if graphene oxide is poisonous. She responded by saying, “It is most definitely a poison.” Ruby then went on to explain some of the ways graphene oxide is dangerous to people. She said:

“It destroys literally everything inside the cell. It explodes the mitochondria. It creates a situation where the body is on a 10-alarm fire truck and inflammation, cytokines, chemokines. This is incredibly violent… inflammatory storm comes in and it has particular affinity for creating acute inflammation of the lungs, it creates an inflammatory storm in cardiac tissue and in brain tissue… There’s no other reason for this to be in [the vaccines] except to murder people.”

Peters agreed with Ruby’s conclusion. He added his concern regarding why the discovery of graphene oxide in the vaccines is not being reported more widely by mainstream media outlets. His only conclusion is that these corporations must also be involved.

“They’re in on it. They want you dead. They’re part of the murder plot,” he said.

Ruby agreed with Peters’ assessment. She speculated that the only other explanation would be that the mass production and vaccination of people with the Pfizer vaccines is “a mass-uninformed, without-consent global experiment.”

Peters added by noting that the supposed efficacy and success rate of the Pfizer vaccine against COVID-19 was “broadcast everywhere.”

“How can they prove that? Was that just a lie? Did they just make up an arbitrary number?” Peters asked.

Ruby rounded out her conversation with Peters by noting that, according to the Spanish researchers, many of the symptoms most commonly associated with COVID-19 could also be caused by excess levels of graphene in the body.

She then warned that Pfizer and other pharmaceutical corporations were in the process of developing an inhalant version of the vaccine. This inhalant version would be more potent because it will go right into the lungs. “It creates a pulmonary storm of pneumonia right away,” said Ruby.

The medical expert then warned that, if this version of the vaccine is granted emergency use authorization, the number of sudden deaths due to “respiratory flash” cases of pneumonia will surge.