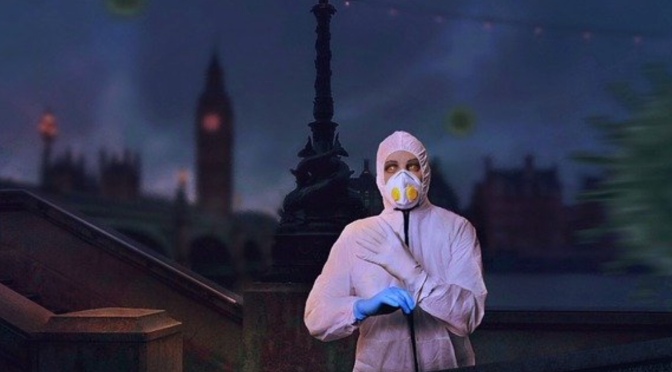 By Joachim Hagopian (via Global Research)

Truth and revolution are in the air. With the unveiling of so many known health hazards linked directly to the Big Pharma industry’s Covid-19 vaccine rollout, the international crime cabal is now on the defensive, using the adage that the best defense is a good offense.

Harder than ever, the ruling elite is aggressively pushing for more worldwide mandates for forced vaccination, permanent lockdown and mask mandates.

Yet the more the authoritarian governments push us, the more pushback they’re receiving from the people who are fed up and reaching their limits living under such increasing draconian tyranny.

As constitutional lawyer John Whitehead advocates, it’s time for citizens to take back their sovereign power by “recalibrating” the overreaching federal government. While the illegitimate Biden regime attempts to put the squeeze on state issued mandates for vaccines passports, more enforced mask wearing and nonstop lockdown, a number of states in America either have signed executive orders or already passed legislation against vaccine passports and/or anti-mask mandates.

Florida and Montana prohibit both private businesses and state institutions from requiring proof of vaccination. Vaccine passports are banned in all state buildings in Idaho, Arizona, Utah, South Dakota, South Carolina, Arkansas, Indiana and Texas, but sorely need to be extended across the board to all businesses. Legislation is pending on no vaccine passports or discrimination based on vaccine status in another ten states. As more truth comes out against the dangers of vaccination, the pendulum is swinging toward more states following suit to protect citizens against the elite’s genocidal insanity.

Despite the Centers for Disease Control and Prevention (CDC) in late July 2021 re-recommending the wearing of face masks indoors due to the reportedly high transmissibility of the Covid-19 so called variants, Texas, Florida, Missouri, Arizona and Iowa have already made masks optional. Generally the Republican states are taking a stand against vaccine mandates while the Democrat run cities and states on the East and West Coasts tend toward the strictest mandates and full lockdown control. The party of the onetime progressives in America has degenerated from a broken, infiltrated education system into the brainwashed wokeism generation, cancel culture, race identity politics, and steeped in Marxist Communism, Political Correctness and victimization as a proudly worn social identity and banner.

Meanwhile, over the last week of July in nations across the world, an over-the-top globalist assault on humanity appears to be growing more desperate and extreme by the day. The lies and crimes of the biggest, deadliest fraud in human history are now becoming more fully exposed virtually every day.

The medical mafia led by the son of a former eugenicist head of Planned Parenthood, Bill Gates has bought and paid for the World Health Organization.

Bill Gates and his cohort Dr. Anthony Fauci have both been among the ringleaders in funding appalling “Frankensteinian” research, using aborted babies’ organs grafted onto mice in the latest exposure.

With Fauci dubbed the 21st century Dr. Mengele, this Gates-Fauci duo are today’s emperors without clothes, exposed as  potential war criminalsagainst all humanity and life.

The latest recycled version of the elite’s divide and conquer strategy is now pitting the vaccinated versus the unvaccinated, falsely blaming death jab resistors for the current wave of so-called delta variant flareup.

National governments, the WHO and corporate media propagandists like Reuters are all now claiming hospitals everywhere are filling up with the latest declared enemy – the unvaccinated.

With the huge 80% majority of new Covid-19 cases with the dreaded “delta variant” in the US, reports from Spain (80%) to California (80%) to Utah (95%+) are all insisting that it’s the unvaccinated accounting for so many new cases, hospitalizations and deaths.

But in actuality, it’s the reverse, the majority of 60% of recent Coronavirus hospitalizations in the UK have already been fully vaccinated, matching the 60% of newly diagnosed cases in the US also fully vaccinated while 75% in Singapore during the last four weeks were fully inoculated.

All these incoming datapoints appear to indicate that wherever people are the most vaccinated, from Singapore to California, that’s where Covid-19 is the fastest spreading.

Unable to come close to meeting his masters’ quota demanding at least 70% of all Americans get the jab by July 1st, with time running out at 78 years old and unable to intelligibly articulate a single spoken sentence, sleepy Uncle Joe’s coming under mounting pressure if he wants to keep his current job… tick tock, the 25th Amendment alarm clock’s about to go off, leaving us with one of the most unpopular politicians of the modern era – Kamala Harris. One thing that’s never changed, Joe Biden’s pathological lying has him frantically drawing the battle line between the good little vaccinated robots and those evil, unruly, unvaccinated troublemakers that CNN just declared should be made to starve to death. From his website whitehouse.gov, Biden, or more probable his proxies, write:

Biden just got the legal go-ahead from his Department of Justice to require all US federal employees as the nation’s largest workforce to undergo mandatory vaccination. On August 1, 2021, Biden’s National Institute of Health (NIH) director said that proof of vaccination would be a step “in the right direction.” When recently asked about state and municipalities issuing vaccine mandates as his backdoor method for the jab, the puppet replied:

I don’t know that yet, I’d like to see them continue to move in that direction, and that’s why I point it out. I had asked the Justice Department to determine whether that is — they’re able to do that legally, and they can. Local communities can do that. Local businesses can do that. It’s still a question whether the federal government can mandate the whole country. I don’t know that yet.

So, obviously we know the national and global agenda is hankering to enforce vaccinations on all of us, violating our sovereign right to voluntary consent as “experimental human subjects.” The criminal cabal’s stale, worn-out tactics of divide and conquer today center on demonizing the unvaccinated. But as hard as they try, it will never work because the cat’s already been let out of the bag – they’re killers!

Going back to race-baiter Obama’s time in office, another of their favorite, over-the-top ploys to divide us is with false flag mass shootings that pit races against each other. The oft-repeated meme of “white supremacist groups” lurking as America’s most dangerous threat is spewed forth by deceitful puppet talking heads – imposter Biden and FBI’s Christopher Wray. But again, that’s not working either as the vast majority of Americans are not nearly so racially divided as malicious false propagandists insist.

Their overkill desperation to divide us, especially during their death jab frenzy, has citizens around the globe finally waking up faster than ever. We the People are onto all the government and media lies and chicanery, because of their overplayed Coronavirus narrative quickly unraveling now, further exposed each passing day.

People are realizing the real public enemy #1 is the controlling Deep State puppet masters and their shamelessly desperate puppets because they know they’re losing control, over the prospect of facing military tribunals for their crimes against humanity.

With prior variants, when people had these rare breakthrough [re]infections, we didn’t see the capacity of them to spread the virus to others… We have a very transmissible virus, which has the potential to evade our vaccines in terms of how it protects us from severe disease and death.

The CDC boss just admitted all their vaccines are useless in preventing the spread of the present delta virus and incoming other prescheduled variants. Back in March 2021, Dr Walensky was cocksure that those who were vaccinated could not possibly infect or spread the virus to others. But this week in yet another 180-degree bombshell turnaround, another pawn masquerading as a leading expert has been forced to admit all the vaccines will not protect recipients from the latest variants, no more than the unvaccinated, admitting that both the vaccinated and unvaccinated infected with the delta variant carry the same high viral loads.

This admitted fact alone gives zero benefit to receiving the kill shot, but only risk a whole plethora of now known adverse health effects, like premature death. Another disconcerting finding that’s emerging among the vaccinated is that their injections only provide temporary immunitylasting about six or seven weeks before it fades, which sets up the need for constant “booster” shots, feeding the Big Pharma money grab. With the fact that vaccines are useless in combating new variants, there’s absolutely no real or lasting benefit at all to death jabs, only potentially disastrous complications that risk extinction of the human species.

Tricking the public into feeling safe with the promise they wouldn’t have to wear masks once inoculated, now that their human DNA’s been permanently altered, the vaccinated are facing a potentially grim fate, with spike proteins, graphene oxide and nanoparticles linked to serious cardiovascular disease, neurological impairment, killer blood clots, rampant infertility and possible early death.

Until death do them part, they’re now considered super-spreaders, endangering the unvaccinated, grandma and the grandkids all remaining unprotected from contagious shedding through either skin-to-skin contact or aerial transmission.

Thus, Walensky and company are back to square one, feebly recommending wearing masks even indoors on a permanent basis, and without an optimally functioning autoimmune system to boot, the vaccinated are targets for contracting the delta and other mutated variants. Per the New York Times, as of July 31, 2021, 54% of the world population has received at least one jab of the 4.13 billion total doses of Coronavirus vaccinations already administered. If those statistics are true, any way you look at it, the majority of humans on earth today are getting a raw deal – a probable one-way ticket to the nearest graveyard.

So much for putting your gullibly misguided faith into trusting today’s “science” and its so-called “experts,” claiming as their excuse the fallible limits of changing science as new information comes in. But that too is another lie as evidence shows that all the susceptibilities of medical injury were already known about prior to jabbing millions of human guinea pigs. Bottom line, everything the medical authorities and establishment have been telling us over the last year and a half are malevolent lies. As card-carrying members of a Satanic death cult, the controllers of science, mainstream media and virtually all the governments want us dead sooner than later. So, do as you’re told and get in line for your genocidal slaughterhouse death jab.

Just a week before her latest admission, on July 21, 2021 Dr Walensky and her CDC were busily once again eating crow, reluctantly forced to admit that the entire Covid-19 “pandemic” was based on a humongous fraudulent lie – the PCR test. It was publicly exposed that the PCR test never accurately diagnosed the “ever-elusive,” nonexistent virus, but only gave millions of false positive results used for misdiagnosing huge swaths of the global population while the pandemic creators knew it was totally bogus. The scamdemic plotters purposely rigged the “science,” or in this case, the PCR device was intentionally, deceptively set at too high a number of cycles to enable millions of false positive results worldwide in order to launch their global Covid-19 Dem panic (note it was also used to get anti-globalist Trump out of office).