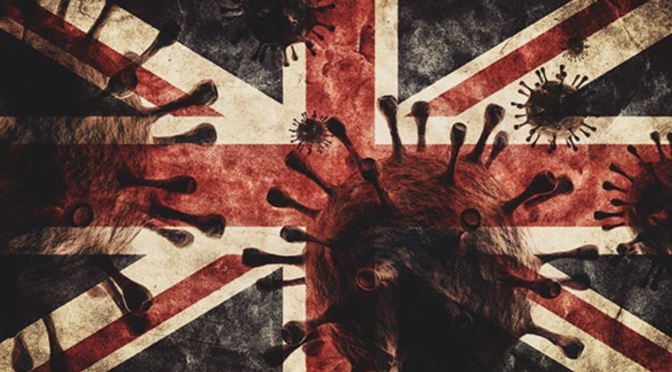 The media can read just as well as me (maybe), but somehow it is left to me to report this.

By Chris Waldburger (via Global Research)

This is an absolute game-changer.

The UK government just reported the following data, tucked away in their report on variants of concern:

Less than a third of delta variant deaths are in the unvaccinated.

Let me say that another way – two-thirds of Delta deaths in the UK are in the jabbed.

From the 1st of February to the 2nd of August, the UK recorded 742 Delta deaths (yes, the dreaded Delta has not taken that much life).

The report is here.

But this is the crucial page. Look at the bottom line.

Obviously some allowance must be made for more elderly people being vaccinated, but not enough to change the bottom line: this vaccine is not nearly as effective as advertised.

And with all its unknowns, and a much higher adverse reporting number than all other vaccines combined, a complete recalibration of global policy is the only moral option.

Countries around the world, as months pass since vaccinations, are experiencing a surge in vaccinated deaths and hospitalizations. 60% of hospitalizations in Israel are fully vaccinated patients. (Hence the mad rush for untested boosters.)

The powers that be will not admit there is something terribly wrong. They will not acknowledge the clear science that people with natural immunity, and the young and healthy, do not need to take the risks of these injections. Read this very important piece on natural immunity. Reliable studies showing the superiority of natural immunity are just ignored by our overlords.Vaccine Passports Illegal, Infections and Deaths after Vaccines, Government and Media Lies, the “Booster” Myth

Instead they will jab and jab and jab again. The vaccine passports will be renewable every six months. Countries are ordering up to 8 shots per citizen. The masks will not go away. Israel, the pre-eminent vaxxed nation, is in lockdown.

The report also made one other important admission:

In other words, getting vaccinated to protect others is not true!

This is NOT a sterilising vaccine that stops diseases like polio or hepatitis using live virus. This is for you alone. Which means, as experts like Martin Kulldorff, biostatistician, epidemiologist and professor of medicine at Harvard Medical School, and Jay Bhattacharya, professor of medicine at Stanford University and research associate at the National Bureau of Economic Research, have long said, it makes zero sense to vaccinate the young and healthy.

We are dealing with a world-historical error, and in fact a global assault on young bodies.

To be clear, I make no advice to anybody about taking the vaccine or not. I may well have decided to take it if I were in a risk category, or if I knew I did not have to wear a mask or get tested after taking a single shot. Your decision should be guided by consulting with a doctor, informed consent, and your own conscience.

And you should ask yourself why there is no explanation for the hundreds of thousands of women experiencing menstrual changes after the shot, or the way vaccines are being mandated at the same time they are under investigation for unknown risks.

What I will say categorically is that you will have to answer one day, in this life or the next, for where you stood on the issue of mandating medicine for the healthy without informed consent, on giving cover for governments to shove things down kids’ noses, and locking down all that makes life worthwhile. Where were you when kids’ freedoms were stolen from them? I doubt there will be much forgiveness from that generation.

Every time somebody posts a meme mocking vaccine hesitance, not only do they alienate the hesitant, and radicalize them, they implicitly endorse a new police state in which a liberal government like Australia feels empowered to pepper spray kids in the face for not wearing a mask that has not been conclusively shown to prevent viral transmission.

For crying out loud, this what even the World Health Organization admits about masks:

The vaccines will not end these measures, especially in countries with low vaccination rates. They cannot, unless these governments admit their massive errors. Their booster shot push makes this unlikely.

Finally, why does the media not even report on governmental data? Why am I reporting this stuff?

I have no idea, but it is truly sinister.

Ask yourself why the media will not even mention the fact that this 23-year-old Irish footballer below, in perfect health, received a vaccine three days before dropping dead: