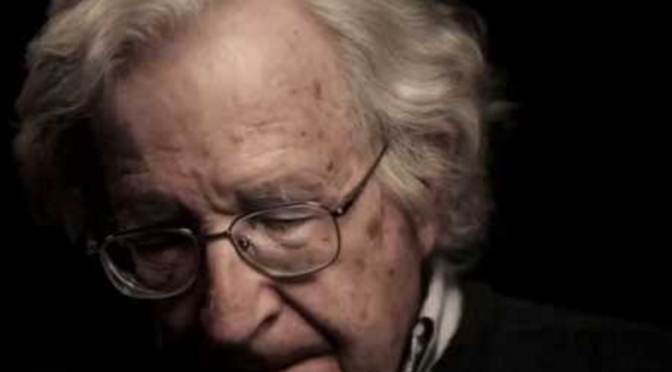 Noam Chomsky was once regarded as the “father of modern linguistics.” As the author of more than one hundred books, Chomsky has greatly influenced cognitive science, philosophy, psychology, computer science, mathematics, childhood education and anthropology. Today however, Chomsky has succumbed to left-wing hysteria and is currently in a state of cognitive decline. He now wants to strip people of consent, due process and starve them into submission with totalitarian mandates and bodily subjugation.

In a recent interview, Chomsky revealed his darkest intentions toward people who do not line up obediently for the current vaccine mandates. He not only wants to see people lose their jobs and future career prospects, but he also wants to charge people with crimes, round them up in internment camps, and control their food supply. In this one interview, Chomsky deconstructed his entire legacy, marking himself as a collaborator in some of the darkest, most heinous crimes against humanity.

Consumed by hysteria and driven by evil, Chomsky is now claiming that individuals are dangerous and deadly if they do not go along with covid-19 experiments. Chomsky is now accusing people of manslaughter if they go out in public “unvaccinated” and unmasked. He wishes to punish these “unvaccinated murderers” by taking away their food and restricting their access to society. It’s as if Chomsky thinks he has reached the rank of Game-Maker, and has the power to pit people against one another in a modern-day Hunger Games. Desiring absolute control over humanity, Chomsky has yet to show he has even the slightest control over his own faculties.

Chomsky’s public health subjugation strategy is to segregate people and starve them into submission. He says the “right response” to the unvaccinated is “to insist that they be isolated” from society. This is the next step in the war against humanity. After taking away people’s livelihoods and opportunities to provide for their family, left-wing fascists and dictators will try to round innocent people up and take away all their due process rights — falsely accusing them all of murder. According to this diabolical plan, once the food supply is restricted, the “unvaccinated” will be more willing to accept internment, re-education and inoculation requirements to assimilate into the new totalitarian hellscape.

“Such people have to be– they should have the decency to remove themselves from the community. If they refuse to do that, then measures have to be taken to safeguard the community from them,” Chomsky said in a recent interview with Primo Radical. “Then comes the practical question that you asked: How can we get food to them? Well, that’s actually their problem.”

“Of course, if they really become destitute then yes you have to move in with some measure to secure their survival, just as you do with people in jail,” Chomsky said.

A modern-day Soviet-style Holodomor is at our doorstep

This plan is reminiscent of the Holodomor or “terror-famine” that occurred in Soviet Ukraine from 1932 to 1933. The Holodomor means ‘to kill by starvation.’ Many scholars believe that this terror-famine was planned by Joseph Stalin to eliminate a Ukrainian independence movement. The Holodomor led to the genocide of millions of Ukrainian men, women and children.

Today, an independence movement is gaining steam, as more people come to realize what is happening before them: unprecedented coercion, violations of Nuremberg Code and crimes against humanity. If these void, soulless entities like Noam Chomsky are willing to carry out their diabolical plans for humanity and threaten human rights further, then a modern-day Holodomor could be ahead in the coming phase of the war. Noam Chomsky revealed which side of history he’s willing to die for, a side from which tyrantshave been strangled and bludgeoned, time and time again.