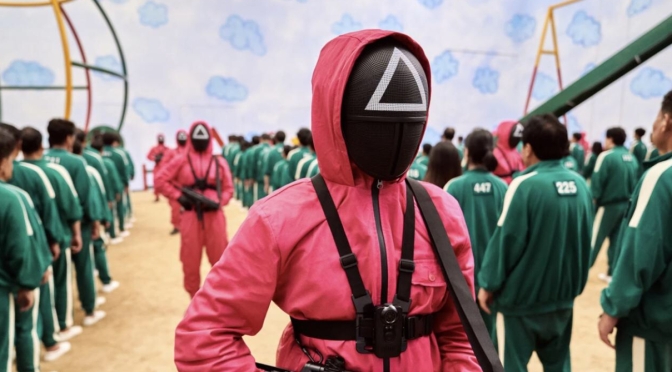 Prospective buyers have been issued a warning as a new Squid Game cryptocurrency rockets in value in its first days of trading.

A warning has been issued about a new cryptocurrency – inspired by the South Korean survival drama Squid Game – after it rocketed in value in its first days of trading.

Squid is a “play-to-earn” cryptocurrency, meaning people can buy tokens to play in online games where they then earn more tokens. These can be exchanged for either money or other cryptocurrencies.

But it’s been criticised for not allowing investors to resell their tokens – with CoinMarketCap issuing a warning to those wanting to buy in.

“We have received multiple reports that users are not able to sell this token in Pancakeswap,” the site says.

“Please do your own due diligence and exercise caution while trading! This project, while clearly inspired by the Netflix show of the same name, is unlikely to be affiliated with the official IP.”

It’s unclear why some users are unable to sell their tokens, but the white paper description of the coin does lay out an anti-dumping technology that prevents people from selling their coins if certain conditions are not met.

“This token did not meet our listing criteria hence it will not be listed on CoinGecko. It’s most likely a scam,” CoinGecko co-founder Bobby Ong told Cointelegraph.

Gizmodo’s Matt Novak also wrote that the crypto is “a total scam”.

“You can put real money into the cryptocurrency, but there’s no evidence you can ever take it out. That’s simply known as theft,” he wrote.

Pointing to the website – available at the domain SquidGame.cash – Mr Novak said the white paper “is filled with poor grammar, bizarre spelling errors, and claims that are impossible to verify”.

“Other red flags include the fact that the Telegram channel set up by whoever’s behind this scam isn’t open to comments from outsiders. And even the Twitter account makes it impossible for regular people to reply to posts,” he added.

“But the single largest red flag is the fact that people can put money in, but can’t take it out.”

Cornell University economist Eswar Prasad told the BBC that Squid “joins a long and growing list of digital coins and tokens that piggyback on random memes or cultural phenomena”.

“Remarkably, many such coins rapidly catch investors’ fancy, leading to wildly inflated valuations. Naive retail investors who get caught up in such speculative frenzies face the risk of substantial losses,” he added.