What’s left are the ‘fatal synergies’ of soaring debt and leverage, diminishing returns on stimulus, the substitution of credit for savings and the coming deflationary tsunami that pops all the speculative bubbles.

Imagine a once modest but sturdy home built near a cliff to maximize the vistas. Over the decades, the foundation slowly degraded and the house moved imperceptibly closer to the unstable edge of the cliff. Those who observed the slippage and the potential for eventual disaster were either derided as alarmists or ignored.

Given the enviable location and views, the home rose in value and a series of increasingly gaudy additions were added, completely obscuring the once-modest exterior with cheap imitations of long-lasting, time-tested materials (plastic trim and brittle fake-marble veneers). The foundations of these ostentatious additions were slapdash, shallow and poorly made, as the goal was not durability but appearance.

The low-quality additions accelerated the slide to the unstable cliff edge, and in 2019 the viewing deck broke away and crashed into the canyon below. The repairs were hasty and the residents were assured all was well–in fact, better than ever.

In 2020, the weak foundation of the gaudiest, lowest-quality addition crumbled. The response of the owners was to fill the widening crack in the decaying structure and spray on a new coat of paint. There–good as new, the residents were told.

But this was not true. The house is now teetering on the precariously unstable cliff edge. Ironically, the vast majority of the residents have moved to the game room, which is now cantilevered over thin air. The slightest movement will tip the entire decayed structure over the cliff.

That decayed, precariously unstable structure is the U.S. economy, and Covid was the catalyst that nudged the economy right to the edge. Gordon Long and I discuss the causes and consequences in our new video program, Covid Has Triggered The Next Great Financial Crisis (34:46).

Chief among the many causes is a very basic one that’s easy to understand: America has consumed more than it has produced for decades, and filled the gap with imports purchased with borrowed money and currency created out of thin air.

As Gordon and I explain, this is a very well-worn path to instability and collapse:governments (which now include nominally independent central banks) have always responded to declines in productivity and affordable energy/materials, the expansion of a parasitic elite and excessive spending with the same bag of financial tricks:

1. They borrow more money, eventually borrowing more to pay interest on existing debts, greasing the slide to default and insolvency.

2. They defraud the users of their currency by devaluing the currency. In the old days, this was accomplished by substituting base metals for silver or gold in the minting of coinage. Eventually the coins contained only a trace of silver. Users soon caught on and the result was the coinage lost purchasing power, a.k.a. inflation destroyed the value of the officially issued money.

In today’s fiat currency regime, central banks create trillions of new units of “money” with a few keystrokes, effectively diluting the value of all existing currency.

3. Desperate for revenues, governments raise taxes, which despite all claims to the contrary by political leaders, fall most heavily on the productive middle class. Since the parasitic elite will never accept any consequential reduction of their wealth or power, the higher taxes and economic stagnation that result from these three policies crush the middle class, which was the engine of productivity and demand that enabled the parasitic elite to live large.

These are key dynamics in what Gordon calls the killing of the golden goose, theproductive synergies that generate widespread prosperity and opportunity.

What’s left are the fatal synergies of soaring debt and leverage, diminishing returns on stimulus, the substitution of credit for savings and the coming deflationary tsunami (53 min) that pops all the speculative bubbles, setting up the destabilization and cliff-dive of the entire decayed, flimsy structure–The Next Great Financial Crisis that cannot be papered over with more central bank legerdemain.

If you found value in this content, please join me in seeking solutions by becoming a $1/month patron of my work via patreon.com.

My new book is available! A Hacker’s Teleology: Sharing the Wealth of Our Shrinking Planet20% and 15% discounts (Kindle $7, print $17, audiobook now available $17.46)

Read excerpts of the book for free (PDF).

The Story Behind the Book and the Introduction.

Covid Has Triggered The Next Great Financial Crisis 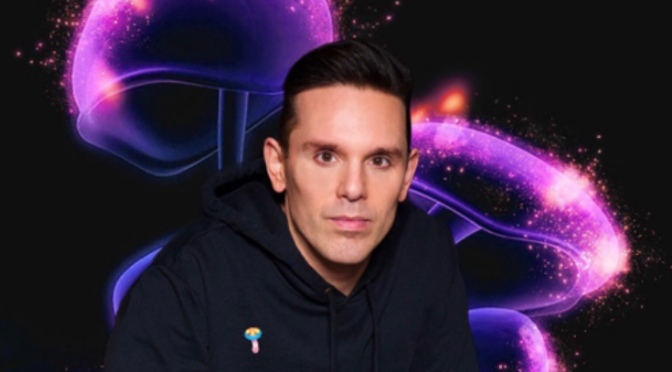 BY TYLER DURDEN (via Zero Hedge)

That’s the actual story of the 42 year old German billionaire that was highlighted by Bloomberg on Thursday. He literally “rode the wave” of every big fad over the last 12 months – including bitcoin and SPACs – and made a fortune in the process.

His family office is called Apeiron Investment Group and has been the lead investor in 7 companies that have gone public in the last year, raising more than $1 billion combined. He has 10 more companies slated to IPO this year.

Angermayer took his first trip on psychedelics in 2015 before investing in companies that are in the space. A conversation with a neuroscientist at a dinner party is what turned him on to the idea of magic mushrooms, despite the fact that he doesn’t drink alcohol. “It was the single most meaningful thing I’ve ever done in my whole life, nothing really comes close,” he said of his first trip, which took place in the Caribbean.

After the trip, he claimed he “finally understood bitcoin”. From there, it became a feedback loop of investing in the things he was passionate about while riding the crypto wave that has swollen over the last half decade.

On his investing style, he said: “I just invest in what I’m very curious and passionate about,” he told Bloomberg. The report calls him the “German version of Chamath Palihapitiya”.

But he doesn’t have as big of a presence on social media as Chamath. This hasn’t stopped him from cultivating serious relationships with influential investors like SoftBank and Peter Thiel.

Bitcoin bull Mike Novogratz said of Angermayer: “He’s probably the best networker I’ve ever met. He’s built this amazing network of people who like and have learned to trust him because he’s made them money. As a capital raiser, he’s awesome.”

Angermayer’s office, based in Malta, “helped China’s HNA Group purchase 9.9% of Deutsche Bank AG stock in 2017′ and received a finder’s fee of $15.6 million for introducing executives at SoftBank and the now-defunct Wirecard.

Apeiron has $2.5 billion in assets, half of which are Angermayer’s. The fund “has averaged an annual internal return of more than 50% over the past decade”, according to Bloomberg. The portfolio is full of companies like AbCellera Biologics, which has developed an antibody drug for Covid and Compass Pathways, a psilocybin-focused depression treatment company that we highlighted shortly after it went public.

He has also produced or executive produced 21 different movies, the report notes. Thiel said of him that his curiosity “allows him to recognize trends very early or invent and create an entire sector himself.”

Benedikt Franke, CEO of the Munich Security Conference said of him: “He is an investor who has fully understood the importance of geopolitics for long-term strategy.”

Angermayer added: “I understand politicians better than investors. One reason I’m very happy is I’m very honest with myself. I want everybody to like me.”

When asked what type of hedging he uses, Angermayer responded: “None”.

One year after the Covid-19 pandemic began, U.S. billionaires have made out like gangbusters at the expense of workers.

By Chuck Collins (via Global Research)

A year ago, the Institute for Policy Studies published “Billionaire Bonanza 2020: Wealth  Windfalls, Tumbling Taxes and Pandemic Profiteers,”  and began tracking billionaire wealth gains as unemployment surged.  We teamed up with Americans for Tax Fairness (ATF) to track the wealth growth of America’s billionaires over the last year.  This report summarizes the extraordinary growth in wealth of those now 657 billionaires based on real-time data from Forbes on March 18, 2021.

Here are highlights from the last 12 months of billionaire wealth growth:

They mostly multiplied their fortunes in the world of online goods, services and entertainment, as forcibly homebound Americans shopped, invested and diverted themselves in isolation. They include the owners of ecommerce leaders Quicken Loans, Square, Carvana, and cryptocurrency exchange Coinbase; social media sites Snapchat and Twitter; online streaming platform Roku; and digital ad agency Trade Desk. 19 other billionaires experienced increases of over 200% while 48 others more than doubled their fortunes with 100%+ gains.

Of 17 industry categories, billionaires in the technology industry had the greatest collective wealth growth—$564 billion, or nearly 68 percent. [See Table 3]

They were worth $1.4 trillion on March 18, 2021, or one-third of the billionaires’ total. The titans of Wall Street—the Finance & Investment industries—saw their wealth grow by $226 billion—a nearly 37 percent increase. Automotive industry billionaires had the biggest percentage point increase in wealth—317 percent based on an increase in wealth of $172 billion. That was largely driven by the extraordinary rise in Elon Musk’s wealth—$137.5 billion or 559 percent.

All but three states saw the wealth of their billionaire residents increase. [See Table 4]

Topping the list in total wealth growth are California at $551 billion, Washingtonat $134.6 billion, and New York at $116.4 billion. The top three states with the greatest percentage increase in wealth are Michigan at 164 percent, Arizona at 110 percent, and Hawaii at 107 percent.

Billionaire wealth growth is calculated between March 18, 2020 and March 18, 2021, based on Forbesdata compiled in this report by ATF and IPS. March 18 is used as the unofficial beginning of the crisis because by then most federal and state economic restrictions responding to the virus were in place. March 18 was also the date that Forbes picked to measure billionaire wealth for the 2020 edition of its annual billionaires’ report, which provided a baseline that ATF and IPS compare periodically with real-time data from the Forbes website. PolitiFact has favorably reviewed this methodology.