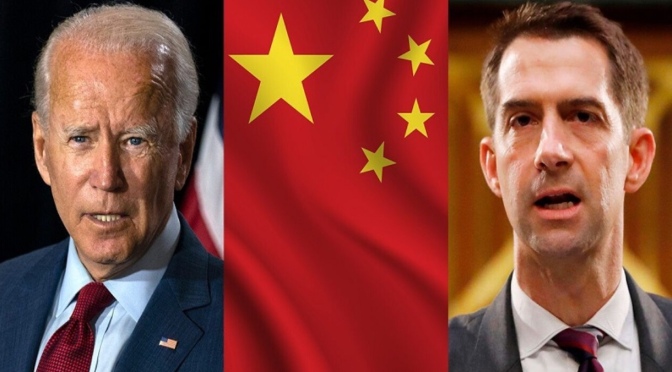 The office of Republican Senator Tom Cotton published a comprehensive containment strategy against China last month that cunningly proposes a series of complementary coalitions aimed towards this end, including in the technological and institutional spheres, which essentially amounts to the creation of a modern-day Iron Curtain if successfully implemented.

President Biden’s strategy towards China increasingly appears to be predicated on expanding his predecessor’s containment policy, albeit in a more multilateral fashion than former President Trump’s mostly unilateral one. This is evidenced by his keynote speech at the State Department last month which led to my conclusion that “Alliances, Democracy, And Values Will Disguise American Aggression”. This was entirely foreseeable too since I earlier predicted that “An ‘Alliance Of Democracies’ Might Be America’s Next Grand Strategic Move”. The behind-the-scenes decision-making basis for this is that Biden must “balance” between competing “deep state” factions in his country’s permanent military, intelligence, and diplomatic bureaucracies that are split between those who embrace Trump’s “America First” international outlook and the liberal-globalists who are more closely connected to former President Obama. I elaborated on the dynamic between them and their possible compromise with respect to more cleverly “containing” China in exchange for cautiously re-engaging with Iran in my related analysis late last year about “Deep State Wars: Trump vs. Biden on China & Iran”.

Republican Senator Tom Cotton, a notorious anti-China hawk, published a comprehensive containment strategy against China last month that was written by members of his office. It cunningly proposes a series of complementary coalitions aimed towards this end, including in the technological and institutional spheres, which essentially amounts to the creation of a modern-day Iron Curtain if successfully implemented. This might possibly happen considering that it largely aligns with the Biden Administration’s multilateral plans in this respect. The 84-page document is titled “Beat China: Targeted Decoupling And The Long Economic War”, and a summary of it can be read at Breitbart here. To be sure, it’s not all bad, since many of his proposals about diversifying the US’ economic partners and reshoring its businesses are sound in principle, as are his suggestions for stockpiling rare earth minerals, semiconductor chips, and other materials of national security importance. So too are his ideas about modernizing regulations and the tax code, investing more in research and development, and improving the federal government’s efficiency. They all make logical sense.

The problem, however, is that he also basically wants to wage a global Hybrid War on China. His rationale is that this is the only possible recourse for America after its prior policy of attempting to influence domestic political changes there through decades of economic engagement failed to achieve any tangible dividends. In his own words, “this generational effort at engagement was an experiment to see whether greater economic integration would generate political change in China”, which he rightly argues has been unsuccessful. Instead of abandoning that consistently failed policy of meddling in China’s internal affairs, he wants to double down on it but in a craftier way through the establishment of semiconductor, 5G, and data-sharing blocs as crucial pillars of the larger “American-led, China-excluded trading order with trusted nations in the Indo-Pacific” that he proposes. In parallel with that, he advises that “The United States should launch a similar effort with respect to the United Kingdom and the European Union, America’s top export market.” The grand strategic outcome is therefore the creation of a massive anti-Chinese containment coalition along the Eurasian Rimland.

This isn’t just for prestige’s sake, but is predicated on his expectation that “Chinese citizens willing to accept an increasingly heavy-handed authoritarian state in exchange for a higher standard of living may think twice if growth slows or stagnates. As a result, the CCP fears that declines in exports, growth, and employment could pose political liabilities.” In other words, the interconnected semiconductor, 5G, and data-sharing blocs that he wants to create within his envisioned anti-Chinese Eurasian Rimland containment coalition are supposed to eventually harm China’s economic growth when paired with a more aggression sanctions and tariff policy, which he hopes will in turn create fertile ground for a series of Color Revolutionsthere that could ultimately make the infamous Tiananmen Square Color Revolution attempt look like child’s play in hindsight. The proposed containment coalition would also prospectively expand worldwide all across the Global South according to his vision of the US “leveraging development finance and foreign aid”. Ironically, this is exactly what the US accuses China of doing against its own interests, so it’s curious that Cotton is embracing this same strategy.

According to him, “Mobilizing these powerful institutions can support a U.S. strategy for targeted decoupling by incentivizing foreign countries to resist Chinese entreaties, such as participation in the Belt and Road Initiative, and supporting American companies in strategic sectors.” These efforts will be made all the more effective if US spy agencies follow his advice to expand operations against the People’s Republic. His report importantly suggests that “the U.S. Intelligence Community (IC) should expand its collection efforts relating to China’s economy, including IP theft, the corporate and capital structures of Chinese firms, the shareholders of China’s strategic companies, and technological developments within Chinese companies.” Although he claims that this proposal is being made defensively in order to identify possible targets to sanction in response to alleged intellectual property theft, the insight obtained through these operations could very easily be abused for offensive purposes to undercut China’s economic competitiveness and meddle in its many Belt & Road Initiative (BRI) partnerships.

The aggressive activities of this global anti-Chinese containment coalition are intended to be upheld by the international institutions that Cotton says that the US should either reclaim or replace if the former isn’t possible. According to his proposal, “America must fight to reverse China’s gains in these institutions and build new, separate organizations of willing and like-minded partners when these organizations cannot be reclaimed. With these organizations out of Beijing’s hands, the United States can ensure that international rules and standards are written to support emerging technologies where America is naturally suited to prevail.” Once again, this is the exact same form of Hybrid Warfare that the US accuses China of waging, making one wonder whether it was ever really guilty as charged or if the US invented those accusations in order to justify itself doing the same thing later. Altogether, Cotton’s grand strategy is one where the US leads a Eurasian Rimland coalition that brings together several China-excluding technology blocs, expands through the strategic leveraging of development finance and foreign aid, and is “legitimized” through reclaimed or replaced international institutions.

Skeptics might immediately dismiss Cotton’s global anti-Chinese containment proposal as politically unrealistic to implement under Biden’s Democrat presidency, but such a stance ignores the fact that the incumbent president convincingly intends to build upon his predecessor’s policy in this respect, albeit in a much more multilateral manner. This insight very strongly suggests that Cotton’s proposal might actually be well received by the Biden Administration since its multilateral vision of a series of complementary coalitions closely aligns with the ruling party’s stated policy of relying more on international alliances to advance American interests abroad. For this reason, it would be a major mistake for observers to dismiss Cotton’s suggestions out of hand since there’s a real chance that at least some of them might be implemented by the US across the next four years. Everything is already moving in that direction without any credible evidence that this trajectory will seriously change in the future. With this in mind, China would do well to consider the most effective strategies for responding to this scenario, ideally in a multilateral manner after closely consulting with its partners.